Dubbed the American Jobs Plan, the eight-year spending proposal promises to modernize 20,000 miles of roads, repair 10,000 bridges and improve the drinking water in 400,000 schools and child-care facilities, among myriad other improvements to the built environment in the United States.

If enacted, the infrastructure plan could ultimately have a bigger impact on American agriculture over the long run—affecting everything from production to management issues. 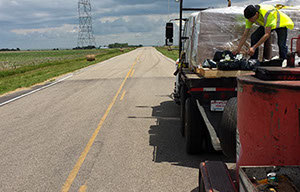 Groups such as the American Farm Bureau Federation and the National Cattlemen’s Beef Association have been pushing Biden to improve rural transportation networks since he took office. This plan would do just that via $115 billion for roads and bridges, $80 billion for railways and $17 billion for waterways and ports.

Other areas of the American Jobs Plan recognizes that agriculture is an increasingly high-tech and data-driven industry.  The more noticeable impact on farmers’ everyday lives in the American Jobs Plan, would be the $100 billion that Biden wants to spend bringing affordable broadband internet service. According to the US Department of Agriculture, one in four farmers lacked access in 2019, the most recent year for which data is available. Meanwhile, having internet access isn’t the same thing as having reliable access. A poll conducted that same year by the United Soybean Board found that nearly 60 percent of US farmers believed poor connectivity was negatively impacting their business.

The President is proposing the eight year American Jobs Plan be funded through increased corporate taxes, with the goal to invest one percent of the nation’s GDP over the term of the project – something that congressional Republicans are already suggesting is a deal breaker for them.

According to Brownfield Ag News, more than 250 rural and ag groups have been calling for the administration to invest in infrastructure improvement projects through the Rebuild Rural Coalition, saying the scope of the investment needed is staggering.

The Michigan Agri-Business Association is one of those groups.  Chuck Lippstreu tells Brownfield, “Virtually every major agricultural organization in American teamed up with a letter to the incoming Biden administration earlier this year encouraging the administration not to forget rural America.”

He says going big on investment would address many of the challenges that rural communities face and would help improve economic opportunities and quality of life for rural residents.