MOLINE, IL – With disagreements between John Deere and union leaders leading to a labor strike, UAW members took to social media Thursday to seek public support during the time of uncertainty.

“We aren’t asking to be millionaires, we are asking for fair wages, a pension and post-retirement health care,” one employee told WQAD News 8. “After 30 years or more of giving your body to a company and moving 1,000 pound castings around or assembling tractors, it rips your body apart. It’s not unreasonable to not want to have that worry in life of, ‘What if?'” 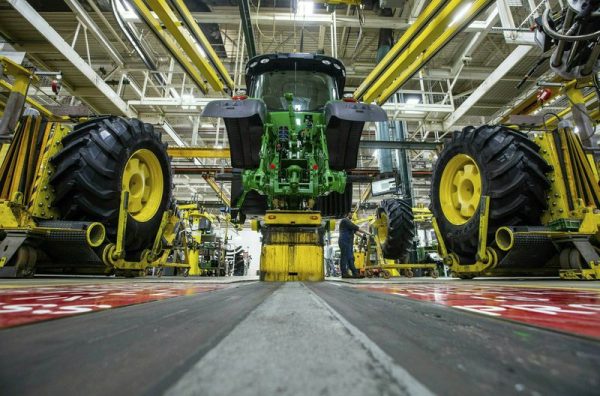 Those on strike are asking for a larger share of pandemic-era profits. Many companies have seen their fortunes surge over the past year. John Deere, for example, saw its earnings reach a record $1.79 billion in the second quarter and operating profits hit $489 million.

Reports of Deere workers makeing $60-70,000 per year are not accurate, according to Jonah Furman, a labor journalist covering the strike.

John Deere claimes that its assembly-line workers would make about $60,000 per year and that the rejected contract would have brought those wages up to $72,000, the Washington Post reported.

Furman contends that most Deere plants undergo significant layoffs on a yearly basis, and those layoffs can last up to three months. Workers aren’t paid for those hours.

“So, to claim that a worker can make $60,000 per year isn’t wrong, but it fails to take into account the lived reality of workers. Most aren’t working the 2,200 hours per year required to make the $60,00 figure. They’re not even getting close,” said Furman.

In addition, Furman reports that Deere’s pay proposal is based on what it calls “CIPP 120 percent.” CIPP stands for Continuous Improvement Pay Plan, which is a team-based incentive pay program that only sees workers gaining wages based on an entire department’s productivity when compared to quotas set by the company.

The quota is upped every six months, Furman reports, whether or not those quotas have been met. He explains, “And even if you do get close — by hitting the proposed 120 percent of your CIPP quota — your money doesn’t go to you. It goes into a reserve fund. If your department doesn’t hit quota six months from now, Deere can take money out of that reserve fund. And if you’re a low-level employee, you’re not getting CIPP money at all.”

Meanwhile, on the customer side of the equation, John Airy, a farmer in Linn County, has been driving Deere tractors since the early 1990s. When he bought a new tractor and needed parts, he wasn’t getting a lot of information on the strike’s potential impact from the salesperson.

“For some people, if you had a part that was not highly stocked inventory part that brings things to a grinding halt,” he said. “And if you can’t get it from John Deere because of the strike, because of parts and distribution or some like that, that could become a real issue for somebody they can go from working to sitting and waiting for parts.”

The union announced just after midnight Wednesday that its 10,100 members in Iowa, Illinois,Kansas, Colorado and Georgia would begin picketing outside Deere’s plants. The strike comes after union members overwhelmingly rejected a collective bargaining proposal that included raises of 5 to 6 percent, in an Oct. 10 vote.

According to news reports, John Deere has activated a continuity plan that will bring in nonunion employees to keep operations running.