STURGIS, SD – As cattle and beef producers –along with politicians – continue to grapple with federal legislation to mandate greater price discovery and transparency in the live cattle and beef trade, the first quarterly report to come out of a much-debated voluntary reporting formula has been released.  But with packers still not participating, how useful the quarterly report actually is will add to the debate.

According to an analysis of the first quarter of the National Cattlemen’s Beef Association’s  (NCBA) “75%” Rule, overall, across weeks and feeding locations, 19.23% of location-weeks violated the 75% rule.   That’s according to Elliott Dennis, Assistant Professor & Livestock Extension Economist Department of Agricultural Economics, University of Nebraska – Lincoln.

This voluntary framework went into effect on January 1, 2021. It includes cattle feeder and packing plant triggers based on levels of negotiated trade and marketplace participation. The overarching objective is to increase the frequency and price transparency in all major cattle feeding regions. 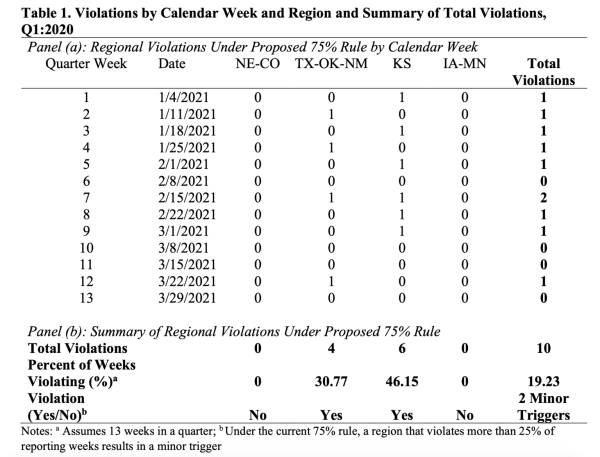 Packer
The packer participation portion of the plan is still under development. NCBA and the Meatpacking Industry have not made any further formal announcements about when or what minor triggers will look like.

The NE-CO and IA-MN regions did not violate any weeks during Q1:2021. The TX-NM-OK region violated 4 of 13 weeks and the KS region violated 6 of the 14 weeks. Under the current proposed 75% rule, both the KS and TX-OK-MN regions would have quarterly violations and thus become minor triggers.

Overall, across weeks and locations, 19.23% of location-weeks violated the 75% rule.

Discussion
The industry’s “75% rule” was developed in response to proposed legislation to solve potential concerns about thinness in negotiated trade across different regions.

The NCBA plan contains triggers that must be met and identifies several qualifications each region will need to achieve to avoid tripping price triggers:

NCBA is pursuing this voluntary approach in an effort to avoid government intervention through a legislative or regulatory remedy. But, NCBA representatives have said that if any of the established triggers are tripped “in any two out of four rolling quarters,” NCBA’s subgroup will recommend the organization “pursue a legislative or regulatory solution to compel robust price discovery.”