U.S. Representatives Dusty Johnson (R-SD) and Henry Cuellar (D-TX) introduced the Direct Interstate Retail Exemption for Certain Transactions (DIRECT) Act. “As a result of COVID-19, meat processing plants across the country have been forced to close or slow operations and as a result we’ve seen a renaissance in small processors,” said Johnson. “Many states, including South Dakota, have inspection standards that are at least equal to what the federal government requires. This bill cuts through red tape and allows producers, processors and retailers to sell state inspected meat and poultry direct to consumers through online stores across state lines.”

“America’s meat industry has been hit hard by financial challenges resulting from the coronavirus pandemic,” said Cuellar. “The bipartisan legislation will open up new markets for meat producers and processors by allowing meat inspected by the State to be sold online and across state lines. As a senior member of the Agriculture Subcommittee on Appropriations, I will continue to fight for the men and women who work every day to keep food on our table during these unprecedented times. I want to thank Congressman Dusty Johnson for his commitment to supporting our meat industry.”

Similar legislation was introduced by US Senator’s Mike Rounds and John Thune (R-SD) in 2018 and was defeated. Food disruptions since the pandemic that began in early 2020 may change the outcome to this most recent effort. 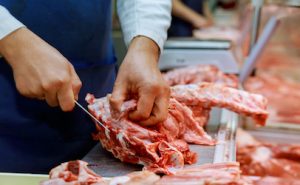 The DIRECT Act will:
*Amend the retail exemption under the Federal Meat Inspection Act and Poultry Products Inspection Act to allow processors, butchers or other retailers to sell normal retail quantities (300 lbs. of beef, 100 lbs. of pork, 27.5 lbs. of lam

b) of State Inspected Meat online to consumers across state lines.

*Maintains traceability of sales easily accessed in the event of a recall.

*Allow states operating under the Cooperative Interstate Shipping system to ship and label as they are currently.

This bill is supported by the National Cattlemen’s Beef Association, American Farm

ply chain must evolve to keep up with the speed of commerce and the demands of modern-day consumers. The National Cattlemen’s Beef Association supports the Direct Interstate Retail Exemption for Certain Transactions (DIRECT) Act because it helps make it easier for the American cattle producer to meet the growing demand of the American consumer to purchase safe and delicious U.S. beef.”

Eric Jennings, President of the South Dakota Cattlemen’s Association points to  a trend for consumers wanting to source beef directly from ranchers.  “Two of the challenges South Dakota beef producers have faced in developing a direct sales market are a limited population of consumers and very few federally inspected processing facilities.,” he said.

portunity for our beef producers to expand their market beyond our limited rural population, but they have been restricted in their broader marketing efforts by prohibitions on interstate shipment of state inspected meat, coupled with few federally inspected plants. South Dakota has had an excellent state meat inspection system that is equivalent to federal meat inspection for many years.” He added, “This bill will allow our producers more freedoms for interstate commerce while still providing a safe beef product for consumers.”

sumers across state lines, says Scott VanderWal, President of the South Dakota Farm Bureau.  “Small, state inspected processors have filled the void for many producers this year when larger plants shut down. This presents a new opportunity for producers to reach consumers directly through online sales.  Consumers wishing to directly order a South Dakota steak would be able to do just that.”

Among the hardest hit in live commodities were America’s pork producer. “The bill introduced is a step to opening up more markets for our local State Inspected Locker plants,” said Craig Andersen, President of the South Dakota Pork Producers Council. “Through the last few months these plants have gone to extraordinary levels to help keep pigs in the food chain. They are in need of extra market access for the product they produce. This bill should also make it easier for producers to harvest and give product to local charities.”