Members representing 30 county Farm Bureau statewide gathered in Billings  to discuss, debate and vote on policy for the coming year. in addition to electing leadership.

Concerns about rising taxes and Congressional pay-fors were on the minds of the delegates who passed a resolution to oppose shifting tax burdens onto rural communities or agricultural lands. 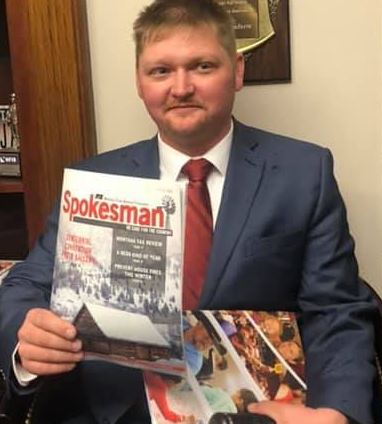 The delegates added policy that would provide extra financial protection against losses by wolves, grizzlies and other predators. The policy supports covering reimbursement for animals that must be euthanized due to a predator attack; currently, only a confirmed death loss is reimbursed.

Although cloud seeding is a controversial topic, the delegate body opted to no longer oppose cloud seeding, but support research on the feasibility, effectiveness and safety of the practice.

The delegates added language to provide more support regarding labor and flexible use of various immigration labor programs. This would add protection to ag labor, and work towards mitigating the ag labor shortage.

Language was added to an existing resolution that supports the testing for tuberculosis in sport cattle coming into the state. The delegates wanted to make sure that the right precautions were being taken to keep the commercial herds safe from the disease.

With much of Montana still reeling from a bad fire season, members spoke up regarding coal seam fires, passing policy to use practical prevention methods to mitigate damages from coal seam fires.

“What makes Farm Bureau unique is the grassroots policy making process, where a policy from a county Farm Bureau can makes its way into the policy book on the national level,” noted MFBF Executive Vice President John Youngberg. “It’s always rewarding to see our members travel to our state convention to show how passionate they are about the issues that affect them on their farms and ranches.”

Peck, a young cattle rancher from Melrose, also bested three other competitors to win the Montana Farm Bureau Young Farmer and Rancher Discussion Meet. He received the keys to a Polaris Ranger® 500 and will be eligible to compete in the national competition which will be held during the American Farm Bureau Convention in Atlanta in January.

The Discussion Meet, which is open to Farm Bureau members age 18-35, is meant to simulate a committee meeting with ideas discussed and solutions developed.

The question for the final round: As the world population increases, so will the need for renewable resources. On a local level and across the globe, how can Farm Bureau help farmers and ranchers continue to increase their efficiency in the use of valuable resources and transition to “Green Energy” practices on their farm or ranch?

During the discussion, Peck said that Farm Bureau should work with private companies and universities regarding research into green energy on the farm or ranch. “I feel agriculture is playing defense on this subject. Farmers and ranchers need to evolve and innovate. Let’s find the funding for research then show farmers and ranchers how green energy can benefit them.”

Peck said, “It’s an honor to win the Young Farmers and Ranchers Discussion Meet. The competition was fierce and it’s great to see so many young people engaging on the big issues impacting agriculture.”